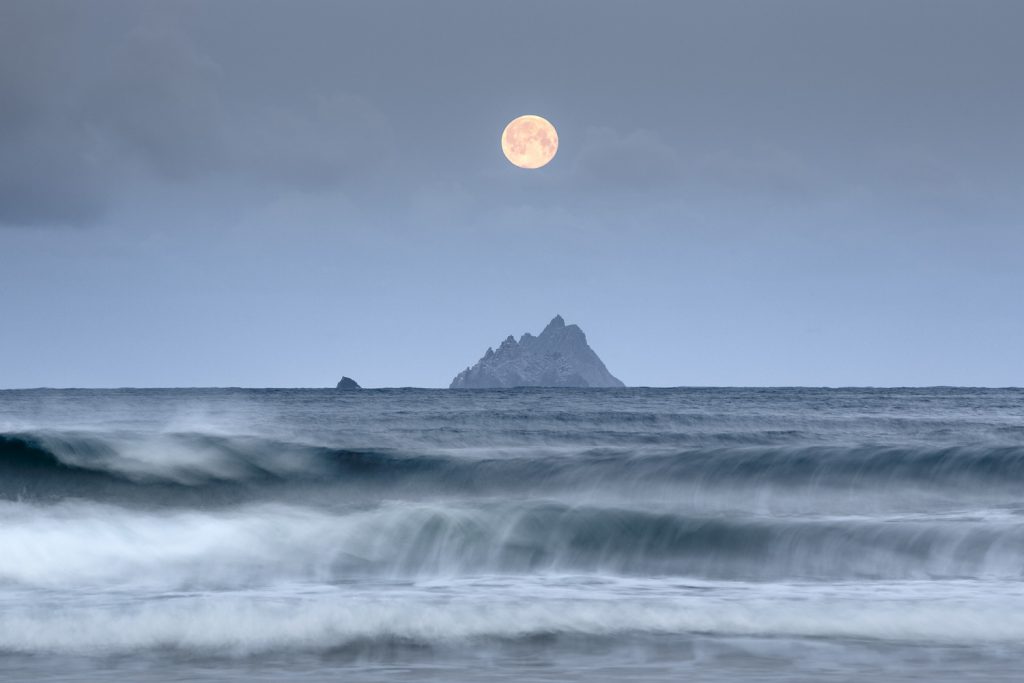 2 years ago, I set off from home at 4am bound for Ballinskelligs Bay to make an image I’d tried to do for the previous 2 years without success. On both previous attempts I was thwarted by clouds and this morning wasn’t looking any more promising. When I arrived things were looking bad, it was still dark but there was a fierce wind blowing , some rain and I realised my chosen location wasn’t going to work at all after all this time.

The image I was looking to make was that of a full moon setting behind the Skellig Islands and was a variation of one which I wanted to make for many years, although not with the Skelligs in mind. In 2011 with the advent of an iphone app that allowed you pinpoint the location and elevation of the moon and sun at any time I made my first attempt. Nothing but a grey cold morning then. The next opportunity the moon was setting further away from the islands but still more clouds. Then in 2012 I noticed that a full moon would be setting directly behind the islands at the perfect time just before sunrise. All I needed was some kind of clear skies.
Having realised that morning I was in the wrong place, I made the decision to drive back down south to St. Finians Bay. As I drove, the clouds broke revealing an amazing scene and the light in the sky began to grow with the approaching sunrise. Driving without care for myself or most of the sheep on the road, I made it down to the beach and ran to position only to see the clouds roll in again. I cursed my luck and I couldn’t see whether it would change or not as the twilight wasn’t revealing the clouds enough to show any gaps. Then without warning they parted and the moon began to tantalisingly appear and hide again. I set up my composition and for the next 10 or so minutes waited for the perfect moment.
Rarely is my photography about a perfect moment, but this was going to be an exception. At 6.14 the clouds parted long enough for me to make one single further exposure with the moon completely visible, and minutes later the magical scene was gone. It was very windy, I was on sand and hand’t time to steady my tripod, so my next thought was ‘Is it sharp ?’ .. thankfully it was and I could enjoy the next half hour on the beach with my flask of coffee, feeling I had captured something special.
It was a moment, and scene that I was happy to share with many, through social media and getting picked up by online press, later that day thousands had seen the image and the reaction was great from everyone. Well, almost everyone. For most people they took the image and description of what it was at face value and admired the beauty of this natural spectacle. For others though they decided that it was far less likely that I witnessed and photographed such a scene, and instead it was something that came from the one place people with very little knowledge of photography know.. ‘ Photoshop’</p>
<p>I’m acutely aware that one you share something on social media you will have varying reactions and you can’t please all the people all of the time. I was however, surprised at the reaction and comments of some fellow photographers, which is a bit sad that some were willing to assume that it was somehow faked, rather than accept the image for what it was.. but that’s the times we live in I guess.</p>
<p>At a recent commercial art fair in Dublin, it continued where the image was my most successful seller, but also the one which I spent the most time talking about.. mainly telling people that yes it’s a photograph, yes it’s real, and no I didn’t put the moon in there.
I can understand it to a certain degree, and what I’ve realised now is that the story of that morning when told.. ( and it’s getting more dramatic every time ) is a great way to connect the viewer to the image and it continues to be one of my best selling images in the new gallery.
The final print needed very little processing which is always my preference, I had underexposed slightly to make sure I had detail in the moon, combined with a slow shutter speed of 1.0 second to blur the wave and f16 to ensure the main elements were in focus. I rarely used the telephoto lens back then, but it was the only option here, zooming in full at 200mm for the decisive moment.
Just in case you’re still not convinced I thought I’d publish a grab of the raw files, the position of the moon on the morning in question .. for all the doubters !

All you need is Instagram !
Next
Letting it all sink in.. 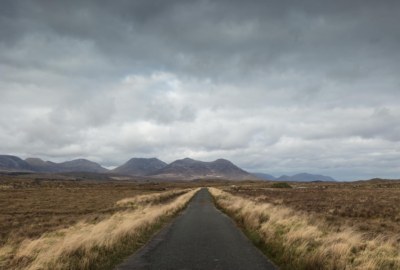 I am very focused and determined to continue working in my own local landscape and cultivate the deep rooted connection I have with it. But it’s both refreshing and inspiring to head off in pursuit of new views and explore the landscape a little further afield at times. For many years I would count down…

Use this form to find things you need